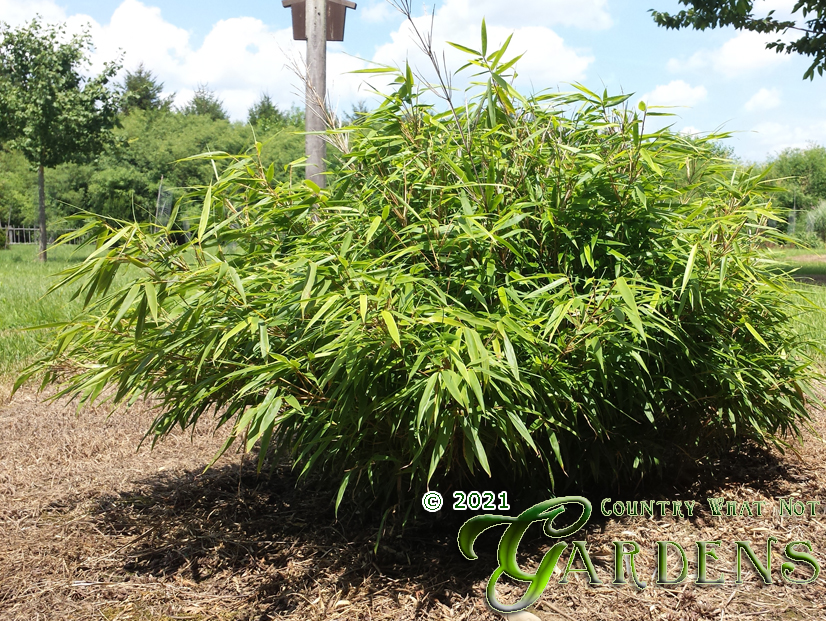 Clumping bamboo sounds like a great idea. I mean, a bamboo that doesn’t spread. That sounds amazing, right?

It can be amazing. It all depends on where you live and what you expect from the plant.

What about people who live in areas that get much colder than 27ºF, you might ask?

That pretty much closes your option down to members of one genus; Fargesia.

Fargesia is a genus of clumping bamboo species native to China’s Himalayan region. Species in the genus Fargesia love cold winters. Certain species even handle down to -20ºF.

Most Fargesia species do best in mild climates such as the Pacific northwest and the northeast United States.

While species such as Fargesia murielae and Fargesia nitida take our midwest winters in stride, they leaf curl into a crippling heat exhausted state during the midday heat here even when situated in full shade.

I should know. I’ve spent a lot of time and money testing this out. I’ve tested multiple plants of multiple varieties of Fargesia in multiple locations for more than two decades.

Most Fargesia species are not adaptable to climates with hot, humid summers. They won’t tolerate it. They die. D.I.E. die, kaput, dead.

These expired experimentals include –

If this was a Monty Python skit about Fargesia it would go like this, “It’s not pinin’ for the Himalayas! It’s passed on! This Fargesia is no more! It has ceased to be! It’s expired and gone to meet its maker! It’s a stiff! Bereft of life, it rests in peace! If it hadn’t heat stressed into ashes it’d be pushing up the daisies! It’s metabolic processes are now history! It’s off the twig! It’s kicked the bucket! It’s shuffled off its mortal coil, run down the curtain and joined the bleedin’ choir invisible! This is an ex-Fargesia!”

Every summer we’re confronted with a crowd of people who want a tall clumping bamboo for screening. Summer is incidentally the wrong season to dig and propagate any Fargesia species. November to March would be the Fargesia propagation season.

#1 They want a clumping bamboo to grow to 20′ tall in the midwest United States.

That’s not going to happen.

#2 They want it to magically grow super fast to any size they desire to screen out a neighbor and then magically slow to a snail’s pace or cease increasing in size altogether.

Please understand this is not how plants grow.

First, no Fargesia is going to reach 20′ tall in the midwest United States.

It takes decades to get a clumping bamboo to the point that it will push up mature sized culms in a matter of six to eight weeks each year thereafter.

So let’s say you still want to grow a clumping bamboo in the midwest United States. Is there any hope of doing so? Yes. In fact, we’re doing it. We finally found a Fargesia that will grow here.

During our trials we found that Fargesia dracocephala ‘Rufa’ will grow here. Very remarkably in full sun to nearly full shade without so much as a flinch of leaf curl on a hot July afternoon.

Will ‘Rufa’ be that magic screening plant? Oh I assure you it most definitely will not. Its maximum size ever is 10′ tall and 10′ wide and that’s under prefect conditions after a couple decades of growing. I will be shocked if ‘Rufa’ ever exceeds 5′ tall in our midwest climate.

Hey, but it at least gives you that large, distinct bamboo look, right? Not exactly.

Its maximum culm diameter is half an inch when grown under perfect conditions. We might see a quarter of an inch here one day.

Okay, but it just looks like small bamboo then? Unfortunately not.

It branches to the ground in a graceful, weeping mound and completely obscures any hint of bamboo look or texture with its mass of foliage.

Having grown ‘Rufa’ now for close to seven years and seeing that it’s still under 3′ tall; my take on it is this – if you want a small, delicate looking accent plant in a small garden or next to a backyard goldfish pond it could be just the right plant.

If you want a 20′ tall bamboo to screen out the neighbors, put in an in-ground rhizome barrier or a raised bed. Then get a “running” Phyllostachys species that will provide that larger bamboo look you want.

Fargesia and Phyllostachys species play different parts in their native environments and so too here in our landscaped settings. We appreciate them each, but for their different attributes.